How do you and your partner show each other affection – hugs, kisses, cuddles? How about caressing one another’s eye stalks or changing colors while dancing together at dawn? Let these ten couples show you how it’s done in other parts of the animal kingdom.

Owls are usually territorial creatures who will not choose to spend much time in close proximity to other owls – like guys sitting on opposite ends of the couch. Owl mates, on the other hand, may stand close together and actually lean on each other as a sign of affection. 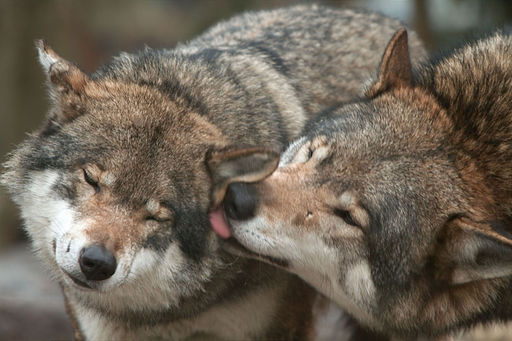 As many dog-owners know, canines often show their love by licking one another’s faces and coats. Wolves in particular will also nip and nibble their loved ones’ faces. Although it can sometimes look aggressive, gentle face nibbling is a sign of affection in wolves.

Male giraffes use their long necks and heavy heads for graceful, slow-motion fights with each other, but they also use them to rub the heads and necks of their love interests. You may spot a giraffe resting his or her head on a mate’s neck, or even entwining their six-foot long necks together. Check out this YouTube video to see it action!

4. The Better to See You With

Land snails, like the common garden snail, will wave their antennae – which are actually their eyes – at each other before mating. The two will caress each other’s “eye stalks” and rub their bodies against one another in a somewhat slimy yet affectionate way.

Elephants’ trunks have thousands of individual muscles in them, and sometimes all of those muscles are devoted to love! Elephants will caress each other’s heads and backs with their trunks, much as a human might with his or her hands. You may also see elephants resting their trunks on each other and entwining them together when they’re feeling affectionate.

This one you have to see in action, so watch one of the many YouTube videos of it out there, like this one that even has a soundtrack.

Seahorses are an interesting bunch from the start, since males – not females! – become pregnant and carry eggs. Seahorse couples are also known for their elaborate dancing rituals, which include not only smooth moves, but also changing body colors. Courtship begins soon after dawn, though, so don’t stay up too late the night before!

Arctic foxes typically live solitary lives until it is time to mate, after which the couple will raise its pups together until the little ones are able to strike out on their own. Arctic fox mates will run and frolic together, playfully nipping at each other as they scamper across the ground.

Cardinals and many other common backyard bird species know the way to their mate’s heart is through her stomach. Even when food is prevalent, such as at a full bird feeder, a male will pick up a tasty seed and bring it to his mate, touching beaks as he hands over the food.

9. It’s Even Better The Second Time 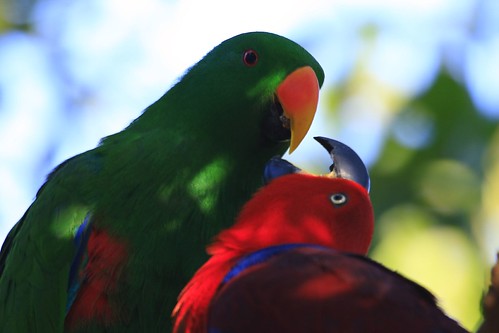 Parrots also feed each other affectionately, but they start digesting the food first. Bonded pairs will regurgitate their food for each other. As many bird owners will attest, pet parrots may also try to feed their human companions regurgitated food. Take it as a compliment!

This one isn’t quite as heartwarming, but it’s fascinating nonetheless! Deep sea anglerfish, like the one with the lightbulb and giant teeth in Finding Nemo, really latch on to their mates. Males are significantly smaller than females, and they do not have the cool luminous spine sticking out of them like the females do. Instead, they swim along until they find a female and latch onto her with their teeth. The male eventually fuses with the female, even losing his eyes and all of his internal organs – except his testes. Although giving it all up for your mate might be romantic in some circles, female anglerfish are not easily impressed and may have as many as six or more males attached at one time.

I'm not your grandmother - talk back to me! Cancel reply